My Month of YA: 5 Lessons from my Teenage Brain

The Holidays may seem years away already, but trust me when I say that your friendly neighborhood retailers are only NOW recovering.

That’s why after the craziness of the holidays, I decided to reward myself with a bit of a treat. I use the word treat loosely… truly, it can only be seen as a treat if you are a 100%, dyed-in-the-wool book nerd. Which I am. So, TREAT!

I wanted to read something delicious, something totally heart-in-your-mouth sentimental, and, most importantly, easy! So, for the month of February, I read only Young Adult Novels.

For one entire month, I was living, breathing, eating, and emoting like a 16 year old. It sounds like a blast, right?

It can be, I guess. But more than that, my month-long experiment taught me a few great lessons about teenagers today (and probably teenagers forever).

These books featured characters articulating their emotions like nothing I’d ever seen before. If someone was mad, guess what? They told their best friend they were mad! And, chances are, it turned into a dark night of the soul followed by some pretty sweet hugging.

In this category, the Feelings Medal Goes to… Teen Spirit by Francesca Lia Block 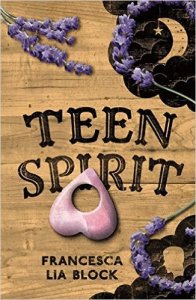 I’m a huge FLB book, but this one left me a little cold. Reeling after the death of her grandmother, Julie is dealing with the emotional detachment of her mother, and the spiritual detachment of her new best friend in more way than one. Ouija boards, intuitive spiritual abilities, and a cute, geeky, Buffy-loving classmate all seemed right up my alley, but this book was PREACHY! If Julie felt something, she was going to say it to ANYONE WHO WOULD LISTEN. In fact, so much of this book focuses on Julie dealing with her emotions that I’d like to suggest a new tagline for the book: “Feelings. We’ve all got ‘em!”

Emotions were at an all-time high in almost all the YA I read this month. But all bets were off if the characters emotions turned a bit romantic. If a character should decide that they might like-like someone…well, this is actually an irrelevant point that leads me into my second point

Seriously. There is no like-like. There is only acquaintance and soul mate. These books pretty much exclusively featured couples that met for one evening and were immediately, 100% hardcore in LOVE.

The Medal for Fastest Fall most DEFINITELY goes to Kiera Cass’ new novel, The Siren. Kahlen has been a siren, forced to do the ocean’s bidding for 80 years. And she’s almost served her sentence when who should she meet but a charming, floppy haired boy with an odd name to match her own: Akinli (I mean, right?). Within pretty much the first day, Kahlen has realized that this love is greater than her sisters, greater than the ocean, greater than her very self.

This was a fun one to read. The love was passionate and noble, and there was even a little girl power thing going on here. Maybe not as irresistible as Cass’ Selection Series, but The Siren was actually her first novel. So it’s understandable she’s gotten a bit better.

YA has become the place where cliff hangers aren’t cliché or frustrating but totally deliciously playful. Even in books where the plot concluded naturally, YA authors seem prone to throw in a last-minute twist in a bizarre plea for a series… that usually works. And you know what else worked? Me wanted to read those sequels. So who’s complaining?

The Cliffhanger Medal goes to Kimberly McCreight’s new novel The Outliers (out May 5th). Wylie has had trouble managing her extreme anxiety ever since the tragic and sudden death of her mother. But when her sort-of-ex best friend texts her asking for help, she figures that she has no choice. That her sort-of-ex best friend’s misunderstood and adorable boyfriend just happens to tag along for the ride isn’t so bad either.

McCreight brings her taut writing style and clever plotting to YA in a fun start to a new series (or at least it freaking better be). This one ends with your heart in your throat. McCreight ties up just enough ends to leave you satisfied, before she takes a pair of scissors and CUTS ALL THE ENDS. Can I pre-order the second one now?

I don’t really know what this says about teenagers today. Maybe their attention span is low or their life is a series of adventures punctuated with moments of staccato danger. Either way, it’s thrilling

Issue writing is nothing new. In a sense, all writing can be seen as issue writing in some way or form. But YA takes this to the next level. When you meet a character, give it a page or two before it’s revealed that they have Troubles with a capital T. Drugs, mental issues, abuse, dangerous predilections… you name it, these teens have it. What surprised me most about this aspect of YA is, for the most part, how incredibly thoughtfully it’s articulated. The challenges faced by the characters I’ve met in the last month have felt real, heartfelt, and overwhelming. Whether it’s the abuse in Med Medina’s Burn Baby Burn and Sarah Dessen’s Dreamland, mental illness in Jennifer Niven’s All the Bright Places, Neal Shusterman’s Challenger Deep and Francisco X. Stork’s Marcelo in the Real World, or just the feeling of not belonging, that you’re not wanted, like in Julie Murphy’s Dumplin’ and Neal Shusterman’s Unwind Series, these issues are handled beautifully, with the artistry of the thoughtful.

This medal is a harder one to award, since almost each novel I read did something exceptionally right in this arena. However, one of my favorite reads was Meg Medina’s new novel, Burn Baby Burn. Set during the summer of Sam (so it’s technically historical fiction, which is the scariest part of this novel) Nora is about to graduate high school with no real plan except to have an amazing summer with her best friend. But the haunting refrain of the Son of Sam murders and a dark family relationship that proceeds to get darker seems hell-bent on preventing that.

Some readers feel very discouraged from reading YA because of just that: Young Adult. But a lot of these novels deserve a second look because they are just wonderful novels with interesting things to say. Are these novels about teenagers? Yes. Yet the beauty of these novels is that they don’t embrace the murky darkness that comes with “adult” novels. The teenagers in YA sparkle with the newness that only the very young can have, the same newness that bound Romeo and Juliet, made Scout question her town’s beliefs, and caused Holden Caufield such existential panic. These novels aren’t novels written about teenagers for teenagers. These are novels that, through the lens of teenage-dom, angle to analyze some of the trickiest parts of being alive: namely, the growing up part.

I related to every bit of these novels—the pleasure of first love, the struggle to find your place, the pain of leaving home. And while YA has certainly earned a bit of a renaissance readership, with adults taking part more often, it could be more. There is no stigma to reading YA because we’ve all been children, we’ve all been awkward, and we’ve all been young adults. So if we’re going to be treated like adults NOW, we should start acting like one, first and foremost by embracing the multiplicity of the human experience. 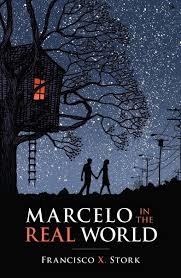 And the Read-Whatever-You-Want-To-Read-Because-You-Are-A-Damn-Adult medal goes to… Francisco X. Stork’s Marcelo in the Real World.

This novel is haunting and beautiful, with crystal clear prose that kept me tearing through the pages. This is a story about justice, morality, and, yes, being 17 with autism. I fell in love with Marcelo, and wanted to put this book into the hands of everyone who came into the bookstore. That’s how seriously good this novel was.

So that wraps up my month of YA. Tell us, what YA novels have you read that are too good to not get more public attention? Were you ever ashamed to read YA? Do Sirens really exist??? Let us know what you think!

Emily is a veteran in the customer service field, waiting tables, making coffee, renting videos (remember those?), and selling books since she was 15 years old. She enjoys glitter pens, drinking wine, critiquing horror movies, and planning vacations that may or may not come to fruition. Perhaps the most accurate thing ever said about Emily is that she is "crafty to a fault." She has a master's, but probably isn't using it the right way. When it comes to reading, Emily is always searching for narrative children's books, multidimensional board books, middle grade novels that make her cry and adult novels centered on concepts of home.
View all posts by Emily →
This entry was posted in Books and Books. Bookmark the permalink.